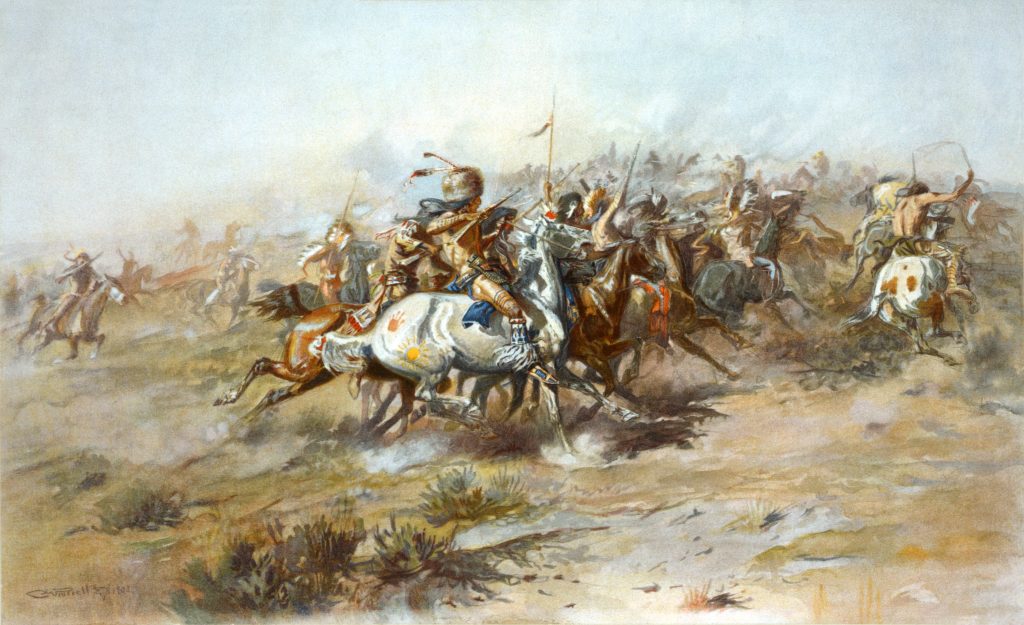 Most people do not think of strategy when they hear about the battle of Greasy Grass, commonly known as Little Bighorn.  The victory of the Indians has been popularity understood as a chance occurrence.  The highly respected Custer broke down in a rare lapse of judgment.  However, if this story is closely examined, one might understand the outcome did not result from just a “crazed moment” but perhaps, a result of strategic orientation.

Crazy Horse and Custer were each raised in two very different environments which resulted in creating two very different world views.  Custer went to a West Point, a training academy that shaped his character.   The school was a pure expression of the ways things were done in his culture.   While there, Custer would learn discipline and obedience.  Almost every activity of the student’s life was laid out in a clear set of rules and expectations.  From the time Custer arose in the morning, he followed a schedule, obeyed orders, followed the rules, and strove to be the best student he could.   From classes, training, study, and even rules on how to keep his room in order, all was a ridged routine designed to forge strong character and create a productive human being.*

Crazy horse grew up in a radically different type of world.   In the Lakota culture there was no hierarchy involving officers and subordinates.  There was no authority position held by anyone who would demand obedience.  In turn, Crazy Horse had no real established routine, no expectations and no rules to follow.   He would learn to be a warrior on his own initiative.  He could have been counseled in what he wanted to learn, but it was his decision.  When Crazy Horse hunted, he would have joined a party of others when the buffalo herd passed, or he may have gone out on his own.   When he sought out a vision, he did so when he felt the time was right.   When Crazy Horse awoke in the morning, he may very well have not known what his activities would be for the day.

In the world of Custer’s West Point academy, students would focus on history.  They would learn all about the battles of the past, the dates, the details, the strategies, and all the key leaders involved.   It was a belief of Custer’s culture that if students studied history, they would better understand the future.  In a way, the fundamental force that drove Custer’s world was progress.  It was the idea that men could take control of their destiny and shape it the way they pleased.  Custer was no exception to this world view.   He wanted move up to the next position, rise high, and achieve more and more.

History did not play a significant role in Crazy Horse’s life.   He may have had heard of past battles, old stories, but for him history was more of that which surrounds the present.  If some great warrior was remember by his people, it was because his spirit endured from acts of courage and bravery.   The story of the Lakota people was often told in myths not history.  They were stories with insights into tribal beliefs, core values and human behaviors.  Unlike history, these myths often had no real-time sequence.  For Crazy Horse, the past may have been unknown, but it was still alive in spirit.

Another difference between the two was the way they viewed at the world around them.  Embedded deep in Custer’s culture was the sense he and his people were superior to everything.  The earth existed for them to conquer.  They sat above all of nature, the plants, the animals, and at times, the dark-skinned people such as Indians and blacks.   For Custer, his life seemed to move in a perpetual state of progression.  Often portrayed as an extreme narcissist, in many ways, Custer embodied the highest of his culture.  At his core, he was driven to be great.

Crazy Horse, on the other hand, believed that he was equal and even somewhat connected to everything.  His people honored the earth, the sun, the plants and animals.  In his world, all was part of the Great Spirit.   Crazy Horse, in contrast to Custer, was in perpetual state of being.   He accepted his situation among his people and his only mission was to serve his tribe.

The battle of Little Big Horn highlights many of these cultural differences.   In terms of strategy, Custer and his fellow officers made battle plans based their past experiences and most recently that experience was the civil war.   The Indians, however, did not fight as expected.  Instead of opposing forces facing each other on a battlefield, it was more a guerilla style of combat.  Crazy Horse lead a surprise attack on one company of soldiers causing a delay in their support of Custer.   One Colonel, expecting Custer to behave the same as a previous battle, made a major tactical error, leaving Custer all alone.  Custer,  perhaps blinded by thoughts of future success, refused to accept the present, even when advised on the count of Indians he was about to attack.

Contrary to popular belief, this battle was about more than just the number of Indians involved.  A strategic orientation clearly influenced all leaders.   Custer and other officers relied on the past methods and found the unexpected. Crazy Horse and Indians leaders deftly changed tactics depending on the current situation.  From the battle of little big horn, we see the context in which strategy can play a pivotal role in the turn of historical events.

Today, in business management, the dominant style of strategy is called a “deliberate” model.  It is a linear way of thinking, like Custer’s, where all parts of putting a business plan into place, such as people, resources, and influences, remain the static.  In this type of strategy, management formulates plans and sticks to their strategy, but in recent years, business experts are realizing this is not how real life happens. Things change.

Today, new way of strategic thinking, called the “emergent” model, similar to the strategy style of Crazy Horse, is taking hold.  In this new model, one understands that things outside of management’s control change.  The emergent strategy allows flexibility to alter guidelines with unforeseen situations.  This emergent model uses components of the deliberate, such as assessment, creating a vision, and setting goals, but the emergent strategy is designed in a way to monitor progress and allow a shift in decision making.

The idea is that if management adheres to the past rigid rules, doing things as they “always have,” even though they may have been very successful, they may find themselves in an unexpected situation guided by an ineffective strategy.  Today, with rapidly changing markets, production methods, technologies and financial systems, a deliberate strategy may not let business leaders identify and capture the many opportunities that may pass their way.

The linear way of thinking has produced tremendous results for economies and businesses, but now it appears the Native way of seeing the world, in their more dynamic, circular manner, can offer insight to create a competitive advantage.   Experts in business strategy are beginning to understand this and today, are using it to create more effective business strategies.

Your Tribe or Enterprise

A clear strategy guides your company’s overall direction.   It defines what you will do and will not do.  Using an emergent strategy, like Crazy Horse, can serve as a guide to winning the battle of economic stability and overall well-being.

Let us at One Fire help you develop your tribal, enterprise and department strategy. Contact us for a free consultation.